Developing for mobile is punk rock! 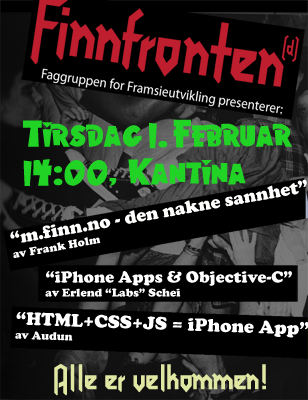 The title of this post is of course a blatant lie. Mobile development is nothing but pain from here until eternity (no, not really). But, luckily the brave developers at FINN.no aren’t scared of a little pain and therefor we decided to do a mobile development trippel header gig to showcase some of the different approaches to mobile developement.Due to some kids falling ille we had to reduce the show to be a double header. It did not end up to make a difference as the guys doing the talks totally kicked ass!

Oh and the picture on the left is a flyer we put up everywhere to market the event at the FINN.no headquarters. Finnfrontend is a name for one of our communities of practice dedicated to front-end development. Unfortunately it was reduced to a double header and we missed out on getting the low down on iOS development of native apps.

Frank and Sven Inge from Team Mobile at FINN.no presented the beta for m.finn.no. As announced previously on labs.finn.no[Gone] the beta for our mobile web service is now available for testing and feedback. We are very excited about this application and we feel that it takes mobile web to a new level here in Norway.

Frank presented some of the plans going forward with the beta (which I am not going to tell here). He also shared some of the experiences and pains with developing for mobile devices. Naturally there are quite a few challenges with compatibility and providing a consistent look and feel across multiple platforms. This has been the bread and butter for web developers for years and it is no surprise that it is hard on mobile devices.

The Team also talked about some of the design decisions they have made and why they ended up solving a challenge a certain way. Choosing to display all information and letting the user scroll as opposed to applying the show/hide-style functionality we are used to from the desktop web seems like a really good choice.

The mobile web solution looks awesome and we can not wait to see the final version! I can only say that it definitely will ship before the 17th of May!

App development with HTML+CSS and Phonegap

Audun Kjelstrup from Nordaker shared his experiences with mobile app development using HTML+CSS+JavaScript for multiple platforms using Phonegap. Drawing on his past experiences with developing the Dolly Dimple pizza configurator for iPhone and the NHO Conference app for iOS, Android and Symbian he covered some of the challenges with this kind of development.

Audun recommended going for a web based app if you wanted a user experience which differed a lot form what comes out of the iOS UIKit. This was mainly due to the cost of development and the work required to create custom experiences such as the Dolly Dimple pizza configurator. He also pointed out that web based apps will always struggle to have the exact same snappyness and scroll smoothness as a native application. Creating a web based app for multiple platforms is hard work (no real surprise there) and having to deal with older Symbian based phones was a lot of pain (no real surprise there either), so you should consider what platform you target carefully. The slides from this presentations can be downloaded from the Cocoa Heads Oslo Meetup where it was held some days ago.

This was an awesome session with two great talks which highlighted some of the challenges with creating applications for mobile devices across multiple platforms. Thanks to Audun and Team Mobile!